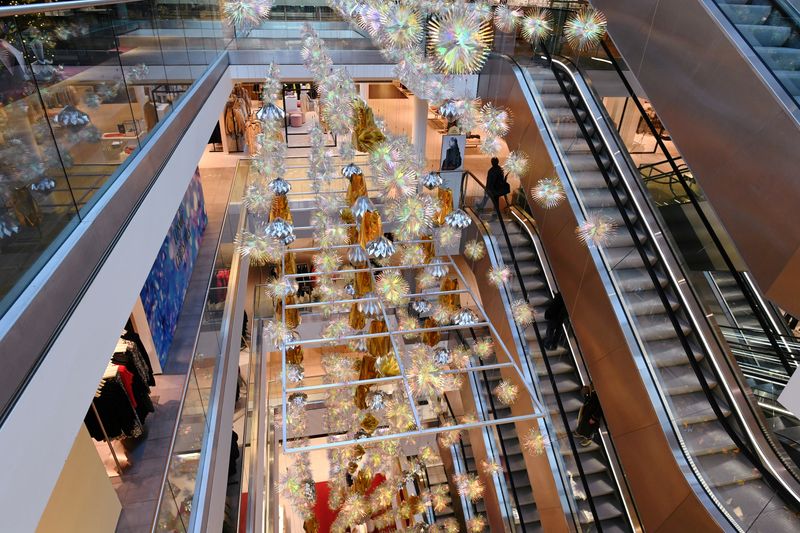 © Reuters. Christmas decoration is seen in a department store in city centre in Nuremberg

BERLIN (Reuters) – One in five German companies is facing a liquidity squeeze amid a second lockdown that has seen most stores and schools shuttered since mid-December, a survey of 18,000 businesses by the DIHK chambers of commerce showed.

That figure is down from 27% in November but shows that government aid is proving insufficient to fully compensate for lost revenues.

Some 5% of companies that participated in the DIHK study said they faced the threat of insolvency, down from around 9% in November, according to a summary of the survey to be published on Tuesday and seen by Reuters on Monday.

Especially hard hit are creative and artistic businesses, where a third said they saw a risk of insolvency, followed by tourism agencies with 30%, taxi companies with 27%, and restaurants and bars with 20%.

The percentage of companies that reported their equity capital had shrunk over recent months stood at 25%, compared with 40%, the survey showed.

Chancellor Angela Merkel and state leaders agreed last week to extend a lockdown until mid-February as Germany, once seen as a role model for fighting the pandemic, struggles with a second wave of infections.

Merkel said at the time that it would be made easier for businesses to access coronavirus aid and that a waiver on insolvency filings for firms hit by the pandemic would be extended until the end of April.

German business morale has slumped to a six-month low in January as the second wave halted a recovery in Europe’s largest economy, data from Ifo economic institute showed on Monday.