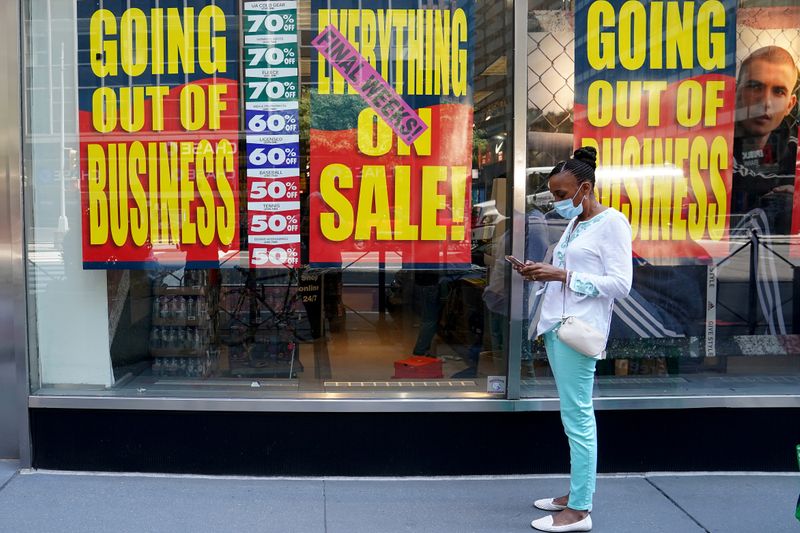 (Reuters) – The vast majority of U.S. small businesses took a hit to their revenue last year because of the coronavirus pandemic, with minority-owned businesses struggling the most and worrying more about accessing credit, according to a Federal Reserve survey released on Wednesday.

The survey, which was conducted in September and October – after the first two rounds of the Paycheck Protection Program (PPP) had closed to new applicants and before Congress had finalized a nearly $900 billion aid package – showed many small businesses worried they would not survive without government help.

Of the nearly 10,000 small businesses surveyed by the Fed, 95% said their business was impacted by the pandemic. Some 78% reported a decline in revenue and 46% said they had to shrink their staff.

Nearly 90% of small businesses said sales had not returned to pre-pandemic levels by the time of the survey. Of those companies, about a third said it would be unlikely that the business would survive until sales recovered without more government help. Some 53% of businesses expected their total sales revenue to drop by more than 25% in 2020.

Outcomes varied widely by race and ethnicity. Some 54% of white-owned firms described their financial condition as “fair” or “poor.” But that share rose to 79% for Asian-owned businesses, to 77% for Black-owned firms and to 66% for Hispanic-owned businesses.

The U.S. central bank heard from 9,693 businesses across the country with fewer than 500 employees. Its Small Business Credit Survey summarized findings from businesses that were operating or temporarily closed, but did not include companies that had permanently shut down.

The majority of businesses surveyed, or more than 90%, looked for some sort of emergency funding during the pandemic, with the most common being the PPP, which provided loans that could be converted to grants under certain conditions. Some 82% of small employers applied for funds from the PPP and 77% of applicants received all of the funding they sought.

The landscape for the pandemic, government aid and the economy have changed drastically since the Fed conducted the survey in the fall. Coronavirus infections surged to new heights over the winter, leading to fresh shutdowns and restrictions, which may have created further challenges for small business owners.

Infections are now declining in many parts of the country and more than 33 million doses of coronavirus vaccines have been distributed. The federal government is also distributing $900 billion in additional aid, including another $284 billion in PPP funding, which opened for applications last month.

Still, research shows that much of the PPP aid distributed in the early months of the crisis did not reach minority-owned businesses, which often lacked existing banking relationships with the financial firms disbursing the cash.

For instance, the first round of funding in PPP loans issued last spring went disproportionately to non-minority businesses, according to a research published in January by Robert Fairlie from the University of California at Santa Cruz and Frank Fossen of the University of Nevada.

But many minority-owned businesses were able to receive support in the second round of PPP loans, which included greater participation from smaller and community-based lenders, the researchers found.