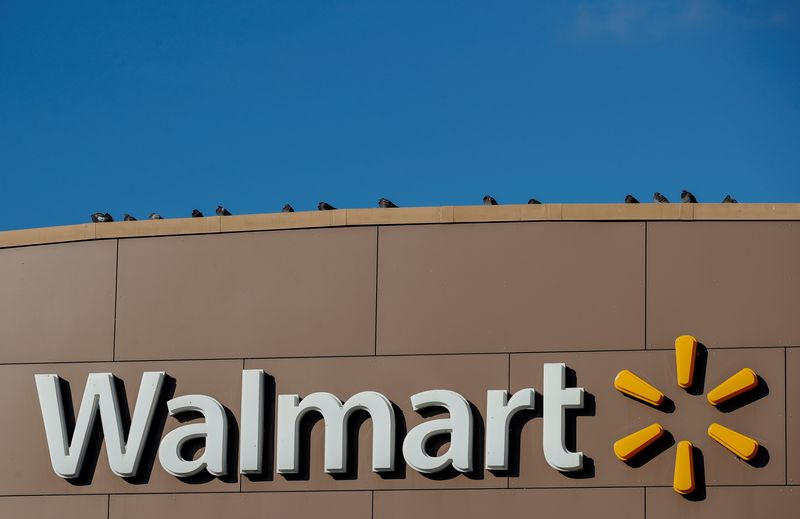 © Reuters. FILE PHOTO: Walmart’s logo is seen outside one of the stores in Chicago

By Jeff Mason and Alexandra Alper

WASHINGTON (Reuters) – U.S. President Joe Biden said on Tuesday he agreed with a proposal by Democratic lawmakers that would limit or phase out stimulus payments to higher-income individuals as part of his $1.9 trillion coronavirus relief bill.

Asked at the beginning of a meeting with business leaders whether he supported the proposal, which would send $1,400 stimulus checks to Americans earning up to $75,000 in income and households making up to $150,000, Biden said, “Yes.”

The president said he had been in touch with Republican leaders about the package.

As well as the economic recovery bill, Biden said he would be discussing infrastructure and the minimum wage with the chief executives of JPMorgan Chase (NYSE:), Walmart (NYSE:), Gap Inc (NYSE:) and Lowe’s Companies (NYSE:).

He said he was anxious to get reaction from the business leaders to his administration’s approach and “to see if we can find some common ground.”

The stimulus package is key to kickstarting Biden’s agenda with a focus on two of his top goals: fighting the pandemic and boosting the economy.

The plan rolled out by congressional Democrats mirrored much of Biden’s own proposal, ignoring calls from Republicans to lower the income threshold for payments.

Biden has stood firm on the size of the checks but remained open to discussion on tweaking the income requirements.

Dimon said in a statement after the meeting that the group discussed “the urgent struggles of so many Americans, a path to a sustainable and equitable economic recovery, and the future of American competitiveness.”

White House spokeswoman Jen Psaki said she expected the meeting to be the first of many with the business community.

Biden is eager to keep attention on his relief package even as the U.S. Senate on Tuesday started the second impeachment trial of his predecessor Donald Trump, who is accused of inciting a riot at the U.S. Capitol on Jan. 6.

Asked about impeachment proceedings, Biden said he was focused on his own job.

“The Senate has their job; they’re about to begin it. I’m sure they’re going to conduct themselves well,” he said.

Despite his repeated desire to unify divided lawmakers, Biden’s stimulus package faces opposition from Republicans, who say it is too large. Biden’s fellow Democrats last week approved a budget outline that will allow them to muscle the stimulus through in the coming weeks without Republican support.

Democrats have a small majority in the U.S. House of Representatives and effective control in the Senate.

Data on Friday showed U.S. employment growth rebounded only moderately in January, and job losses in the prior month were deeper than initially thought. This strengthened the case for a sizable relief package from the government to aid the recovery from the COVID-19 pandemic.

By Padraic Halpin, Sarah Young and Simon Johnson CONNEMARA, Ireland (Reuters) – Up until late January Terry O’Toole was fielding a trickle of enquiries from Irish holidaymakers…

By Leika Kihara TOKYO (Reuters) – The Bank of Japan must be mindful of the potential demerits of its huge asset purchases, board member Toyoaki Nakamura said in a sign the central…

By John Geddie SINGAPORE (Reuters) – Having delayed its ‘Davos’ summit in Singapore twice already, the World Economic Forum is pressing on with plans to gather in August, but how…