“The world is upside down right now,” said Kieran Neely, operator of the 175-person Music Room, speaking while on his way to a meeting with his landlord on Friday afternoon. “I’m not going to be able to pay the rent,” he said. “We’re in the business of creating large gatherings, and the messaging we’re receiving is that people should not be attending large gatherings.”
Over the next few days, Neely will be experimenting with live-streaming DJ sets. He’s not closing the venue yet, but he feels the pressure to shut its doors: this weekend is an experiment, he said, “to see whether people are brave enough to go out and dance.”
On Thursday and Friday, after a few days of what felt like an extended exercise in breath-holding, much of Atlanta got canceled.
It started with a trickle—Tuesday’s Fulton County public school closures following an employee’s positive test for infection with the COVID-19 virus; the NCAA’s Wednesday announcement it would play its much-anticipated men’s Final Four games, scheduled for early April at Mercedes-Benz Stadium, without fans (it later canceled the event altogether).
Then, on Thursday, the same day Governor Kemp announced the state’s first death from a COVID-19 infection, a torrent: Atlanta Public Schools, Decatur City Schools, and most other area school districts closed for at least two weeks. The Mayor’s annual State of the City address and the Atlanta Symphony Orchestra’s weekend programming were postponed; Atlanta United—along with the rest of Major League Soccer—canceled its games; NASCAR suspended an upcoming race event at the Atlanta Motor Speedway. The Atlanta Opera and the Alliance Theatre have also canceled shows.
“It’s not an overreaction,” says Benjamin Lopman, an epidemiology professor at Emory’s Rollins School of Public Health. “As there’s more and more people who are infected in the community, the risk becomes higher,” he says, “so as things move along, it makes sense to be more aggressive.”
Canceling crowds is not a new public health trick, but it’s an effective one. During the 1918 Spanish Flu pandemic, cities that closed gathering places like schools, churches, and theaters had about half the peak death rates of cities that didn’t. “Proactive approaches are going to be more effective at slowing transmission,” says Lopman.
Upon reaching the point where there are thousands of infections circulating in the community, the chance that someone at a 10,000-person event will be infected increases sharply. Josh Weitz, a Georgia Tech biology professor who models viral dynamics in populations, recently tweeted a chart demonstrating the risk of encountering a COVID-19-infected person at an event as crowd size and the virus’ prevalence increase. “Take-away point: serious questions should be asked soon about policies for holding large-scale events,” he wrote.

Take-away point: serious questions should be asked soon about policies for holding large-scale events (and even certain small-scale events depending on locality) that minimize risk for all and preserve public health resources for those who need it most. 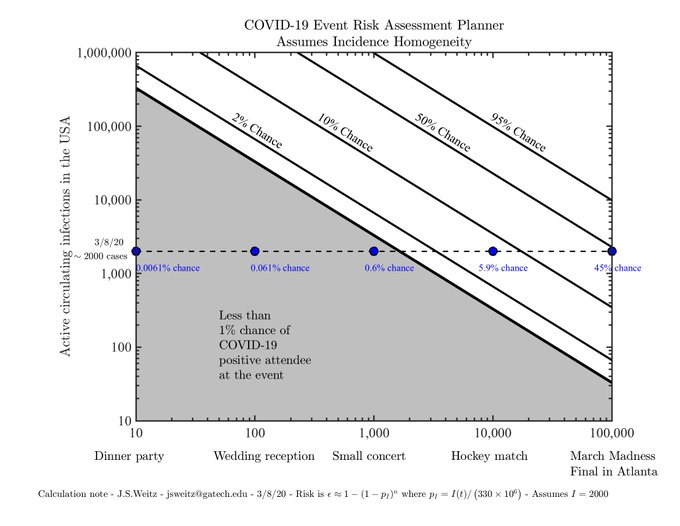 259 people are talking about this

Georgia’s numbers of confirmed COVID-19 infections might seem so low as to be negligible: 45 people out of the state’s 10.5 million doesn’t sound like many. But because access to testing is so profoundly limited in the U.S., the number of cases we know about is probably just the tip of a very large iceberg. In Washington state, where 457 cases have been reported, viral dynamic modeling has suggested the actual number of cases is at least twice as high and will double every 6 days.
To date, neither the Centers for Disease Control and Prevention nor the Georgia Department of Public Health have recommended canceling mass gatherings. Georgia’s elected officials have not made formal statements on the subject, although the Atlanta Journal-Constitution reports city mayor Keisha Lance Bottoms is in discussions with Governor Kemp about issuing a ban on large events.
Georgia currently has 45 confirmed cases of COVID-19 infection. States with fewer cases have been more proactive about crowd control: In a press conference Thursday, Florida Governor Ron DeSantis recommended postponing large-scale events, according to local reports; 31 cases have been reported in that state. Governor Mike DeWine of Ohio, where five cases of COVID-19 infection have been confirmed, announced Thursday that gatherings of more than 100 people would be prohibited.
The goal of canceling large events isn’t to stop transmission entirely—most public health officials agree that’s impossible—but to slow it down to reduce the chance a surge in infections will overwhelm an already-strained healthcare system.
“We’re at a turning point in the response to this epidemic,” said Lopman. He’s been following the accounts of healthcare workers in Northern Italy, where more than 100 deaths each day are being reported from COVID-19 infection, and where hospital intensive care units and healthcare workers have been overwhelmed.
The infection is highly transmissible, likely to be severe in many adults, and likely to be new to almost everyone’s immune system, he said. “Public health is not overplaying its hand.”